How to Get Rid of Arrows on Blogger Templates

How to Get Rid of Arrows on Blogger Templates - Blogger.com, Google's free Blogging platform, is undergoing many improvements.

Updates and updates related to the Blogger system have brought quite a lot of changes.

Both the appearance that is increasingly user friendly and more responsive when opened via a mobile browser.

Until other features that are increasingly adapted to the development of the system related to the rules of modern Blog / Web.

How to Get Rid of Arrows on Top of Blog Pages

In this update, it caused several errors such as the appearance of an arrow at the top of the blog.

This error usually occurs to those of you who use the latest templates or old templates that have performed optimizations such as removing CSS, JavaScript and the Blogger Default Bundle Widget.

Where this is done to further optimize the loading of the blog.

And the fear is that if it is not handled immediately it will cause certain errors in the future when there are other new updates.

Therefore we will share a tutorial on removing the arrow above the Blog that appears after the Latest Blogger Update.

Here are the steps:

Then click the Colon next to the "Back up" button

After that select Edit HTML

Next look for the following Head Cover code:

Now then we will change the Body code

Look for the Body Cover code as follows:

At this point, you have succeeded in removing the Arrow at the top of the Blog Page, but it makes loading the blog heavy.

This is caused by the Blogger Widget CSS and JS Bundle which will appear again after changing the code back to its original state.

how to delete permanent and temporary TikTok accounts

If you want to delete your Tiktok account permanently or temporarily, then you don't need to worry anymore. Because, the Tik Tok application has provided the delete account feature.

Given that Tiktok is a social media for sharing short videos which is quite popular. Tiktok itself continues to strive to develop features in it.

And the delete account feature is a necessary feature for social media. Especially for TikTok which has very many users and is spread all over the world.

Some TikTok users, of course, feel bored or bored, so they want to delete their accounts. That is the reason the delete account feature is provided in the Tiktok application.

Apart from that, there are many other reasons why someone might want to delete their account. So, for that it's good to understand how this feature works so that you don't have trouble using it.

Deleting a TikTok account is divided into two types, namely deleting the account permanently and temporarily. You must determine one of them according to your needs.

As a note, before doing so, there are a number of things that you should know when you delete your TikTok account permanently. The following are below:

Permanently deleting a Tiktok account is a very easy job. The reason is, you can do it directly using the features in the Tiktok application. 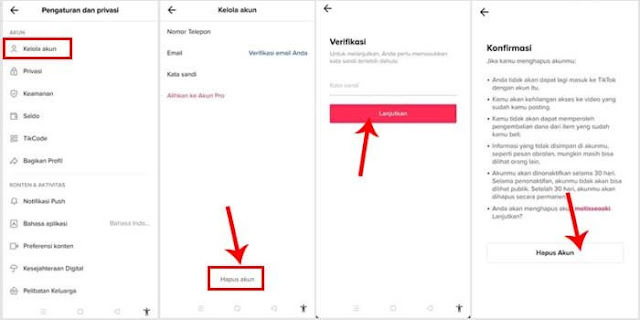 After it has been running for 30 days, it is certain that the Tiktok account has been permanently deleted forever.

If you want to delete your TikTok account for the time being, then you can also do it very easily. You can use the features provided in the TikTok application.

To reactivate it, you only need to log into the TikTok application. Then you will be shown an account description as shown below. 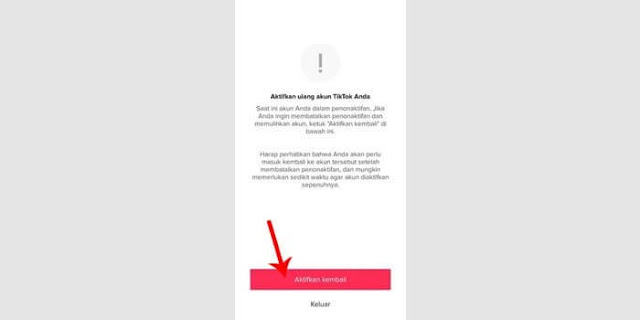 So, those are some ways to delete a TikTok account either permanently or temporarily deactivating it. Hopefully useful and good luck!

How to upload Instagram stories via PC can be of use to you if you don't have a smartphone with you.

Although generally the PC version of Instagram does not have more complete features than Instagram in a smartphone application, the reality is not. Want to know how to repost someone else's Instagram story? Use the way to repost people on the story.

Here are some ways to make Instagram stories via a PC or laptop computer without an application. You can try the one which you think is the easiest and fastest.

Can Blogspot subdomain be reviewed?

Can Blogspot subdomain be reviewed?

There are many rumors that the blogspot subdomain (nameyourblog.blogspot. com) cannot be verified or linked to this 2018 AdSense account. Actually that's not true, blogspot can be linked or added like a TLD (Top Level Domain). The possibilities for being approved or passing a review site are just as great as for the TLD.

Just to connect blogspot, you need to connect via blogger dashboard, in the income column. So you can't directly enter the domain name on the AdSense dashboard. If in the past you could ...

Connect your blogspot on blogger dashboard, and the review will take place. This method will automatically be associated with your AdSense account. Usually less than a day also approves if there are no problems as noted above.

If the earnings column doesn't appear, try changing the language on Blogger to English, keep refreshing. After that, usually the earnings or income column will appear

In conclusion, you don't need to worry if your AdSense account has a review site feature. There are many ways to go to Rome..

February 15, 2021
Documents that provide information about the law on the internet and display admin information that can be contacted directly are usually called

Below I will provide a tutorial that you can practice to create a Privacy Policy page and how to install it on your blog ..

How to Place Ads in the Middle of Blogger Articles

Google AdSense is only one of the advertiser companies for publishers, in fact there are many advertising companies that we can use. For how to advertise, we can also set it according to your wishes. For this reason, in this article I will provide a way to place an ad in the middle of the article.